Crime Stoppers Guelph Wellington (CSGW) Board members and staff were joined by Guelph Transit officials July 8 to unveil a new bus shelter advertisement to the public. The shelter advertisement, designed to promote CSGW’s social media platforms, as well as highlight the toll-free number to report crime and the webtip option, is a new initiative for the program. 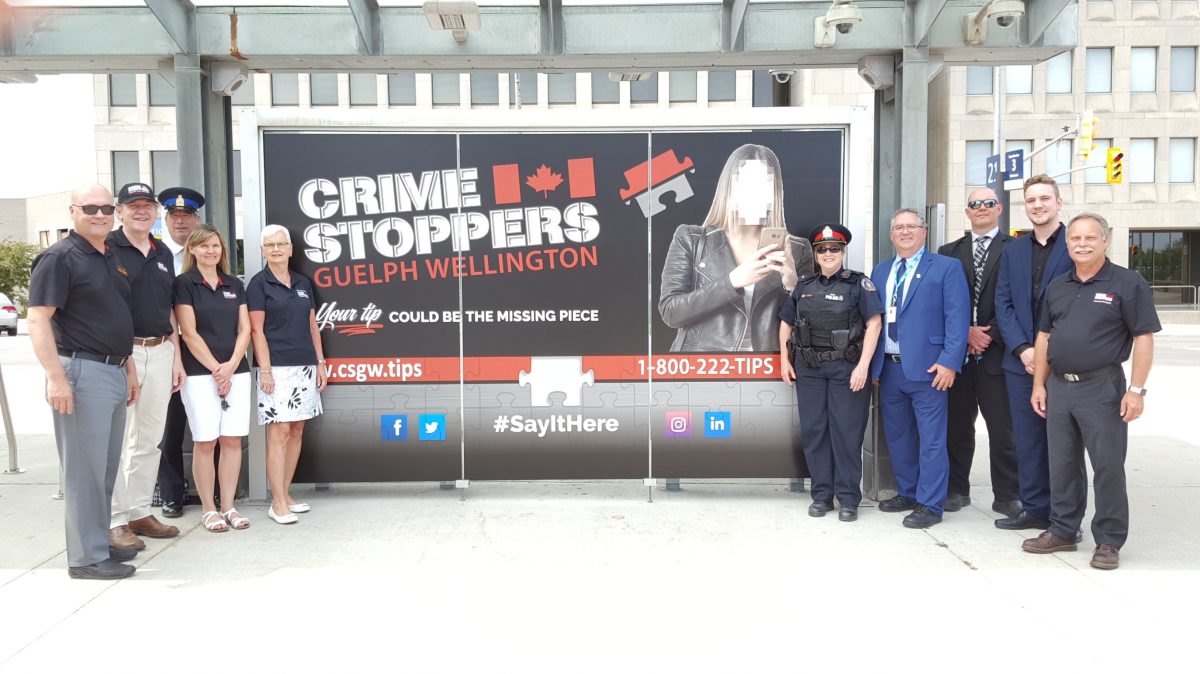 “We are pleased to work with Guelph Transit on this new mode of awareness,” said Rick Beazley, Chair of the CSGW Board of Directors. “Developing partnerships in the community continues to strengthen Crime Stoppers.”

Program Coordinator Sarah Bowers-Peter added that the shelter is part of an ongoing mission to increase awareness of CSGW.

“This shelter is a terrific way to reach out to public transit riders who are residents of the city of Guelph, and those coming in by train who are visiting this community,” she stated. “It’s great that one of the first things someone will see when they come to Guelph is a bold statement that Crime Stoppers is alive and well here.”

The bus shelter advertisement, located on platform 21 at Guelph Central Station, north of Carden Street and opening onto Macdonnell Street, is part of Guelph Transit’s new advertising opportunities. The shelter advertisement will boast the CSGW message until June 30, 2020.

****CONTEST ALERT*** Take YOUR picture in front of the CSGW sign on Carden Street and post with #CSGW and you will be entered into a draw for great Magic 106.1 & Crime Stoppers Guelph Wellington swag! Name to be drawn August 12 on the Magic 106 Home Run with Brad Hulme.

If you have any information about any crime, call Crime Stoppers at 1-800-222-TIPS (8477) or submit an anonymous tip on-line by clicking here. You never have to give your name or testify in court. If your information is used in an arrest you may be eligible for a cash reward of up to $2,000.

It's YOUR Community...
MAKE THE CALL!