(CITY OF GUELPH) At 8:45pm on Thursday February 20th 2020, an act of mischief occurred at a commercial building located in downtown Guelph. The culprit pulled the fire alarm when there was no actual fire. 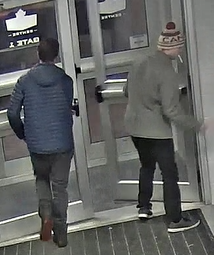 The culprit is described as male, white, in his early 20’s with a slim build. He was wearing a grey jacked, dark pants and shoes, a red shirt and a red & white Canada pom pom toque.

Another individual in the area at the time, is described as male, white, in his early 20’s with a medium build and short brown hair. He was wearing a blue jacket, dark pants and dark shoes.

If you have any information about this crime, call Crime Stoppers anonymously at 1-800-222-TIPS (8477). You can also submit an anonymous tip on-line at www.csgw.tips. You never have to give your name or testify in court. If your information is used in an arrest you may be eligible for a cash reward of up to $2,000.

Help CSGW by sharing this:

(TOWNSHIP OF PUSLINCH, ON) At approximately 5:45am on Wednesday February 6th 2019, a vehicle theft occurred from a parking lot on Nicholas […]