The sun shone on a celebration marking 30 years of Crime Stoppers Guelph Wellington.

The day started with a flag raising in front of the Mount Forest Museum and Archives. 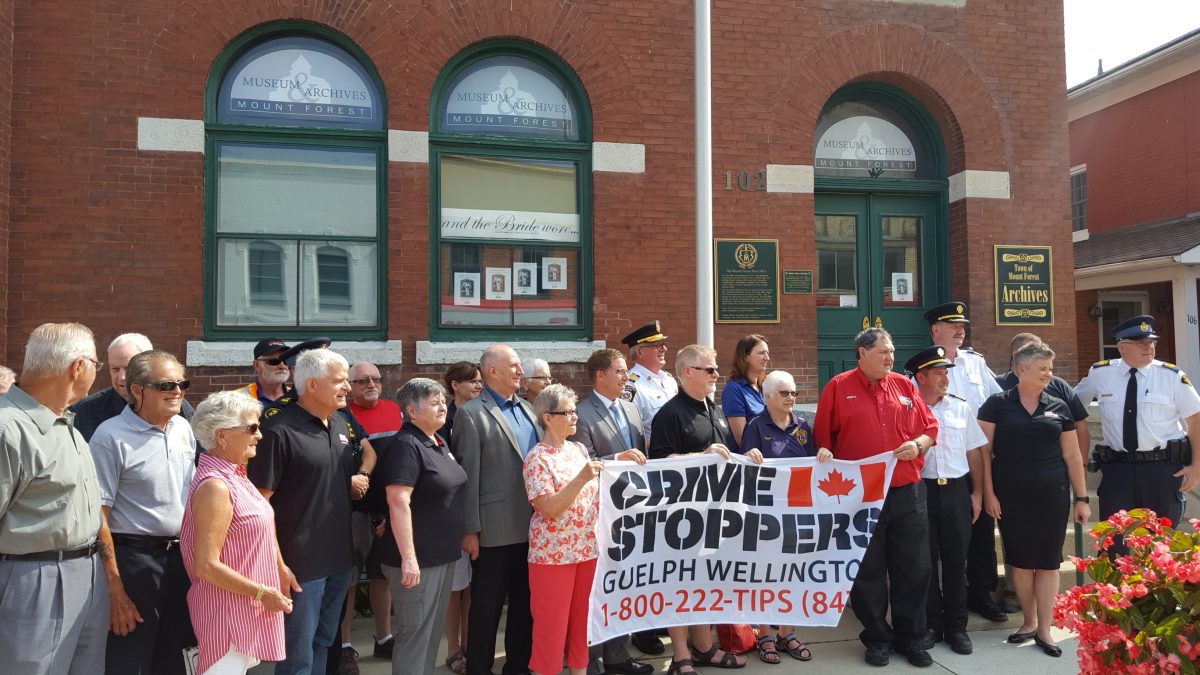 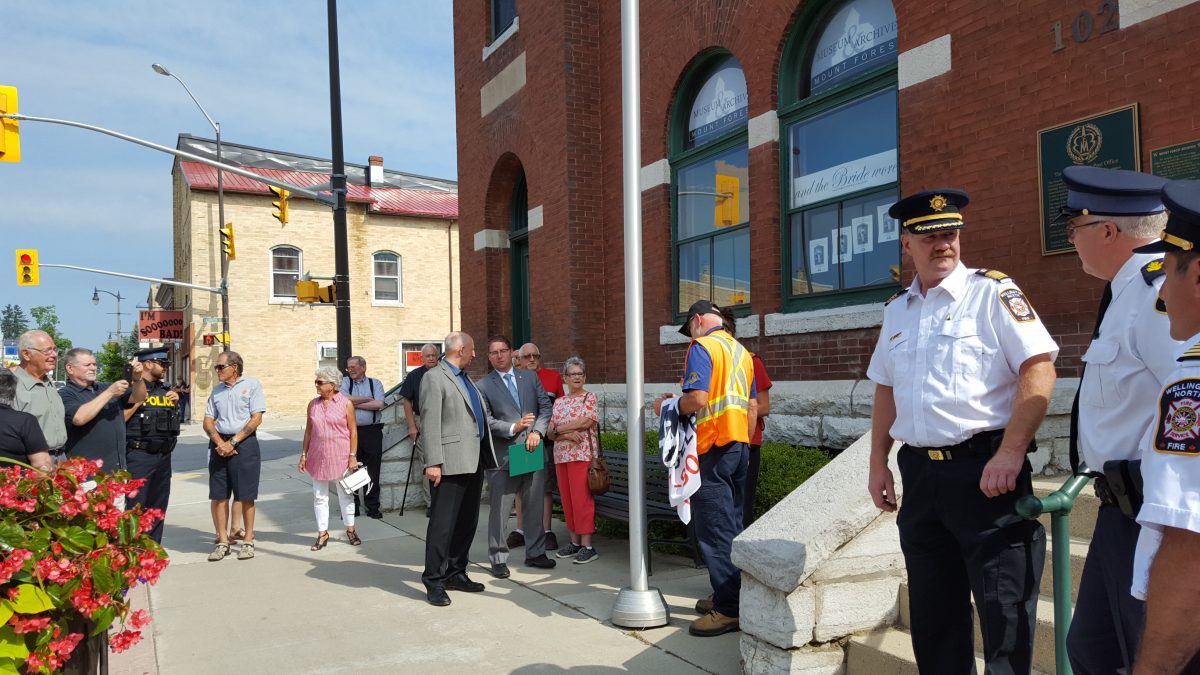 The flag will remain on the flag pole for a month, marking the special anniversary.

Those gathered then moved to Murphy’s Park in Mount Forest, Township of Wellington North. There, speeches were offered by a number of dignitaries. 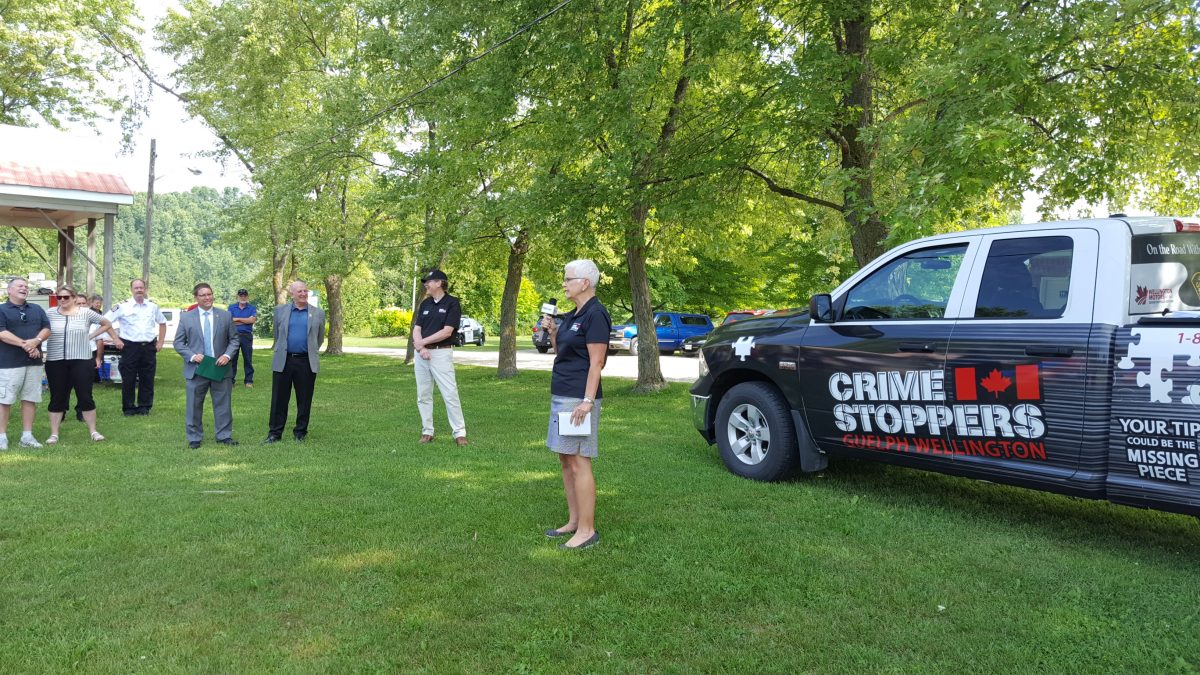 Marlene Coughlin, head of the 30th Anniversary Committee and long-term Board member, brought greetings on behalf of the Board of Directors, and outlined the need to celebrate the milestone. 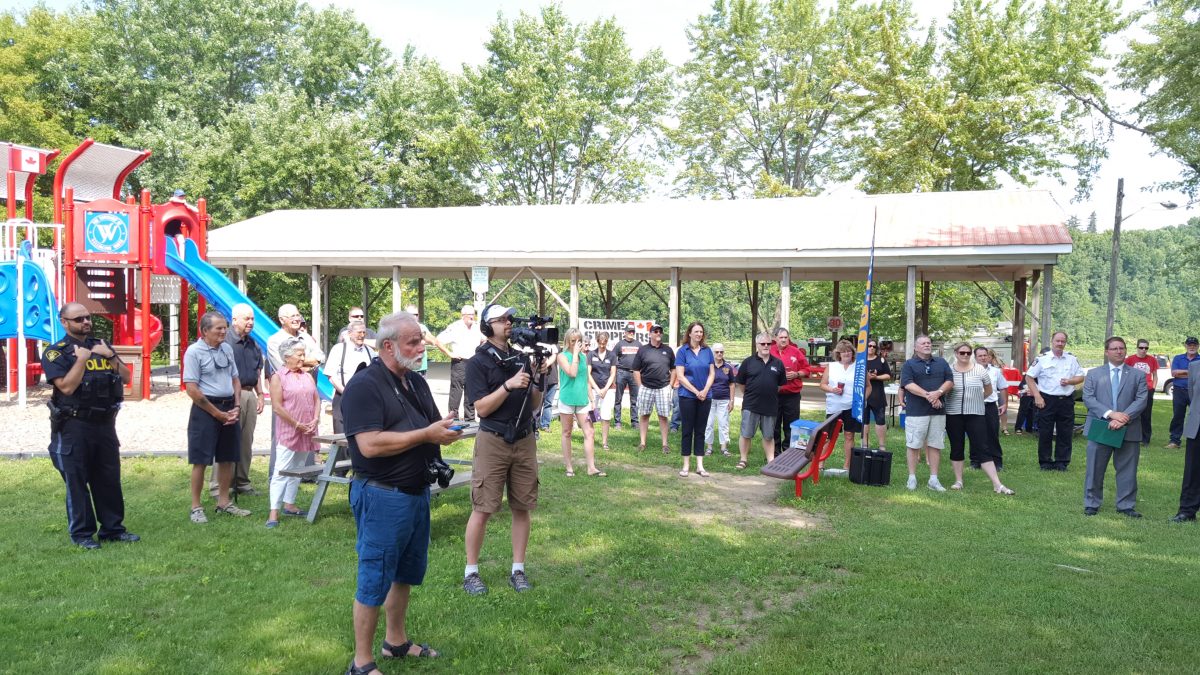 The event was well attended, with even more guests joining in for the free barbecue and cake offered following the speeches. 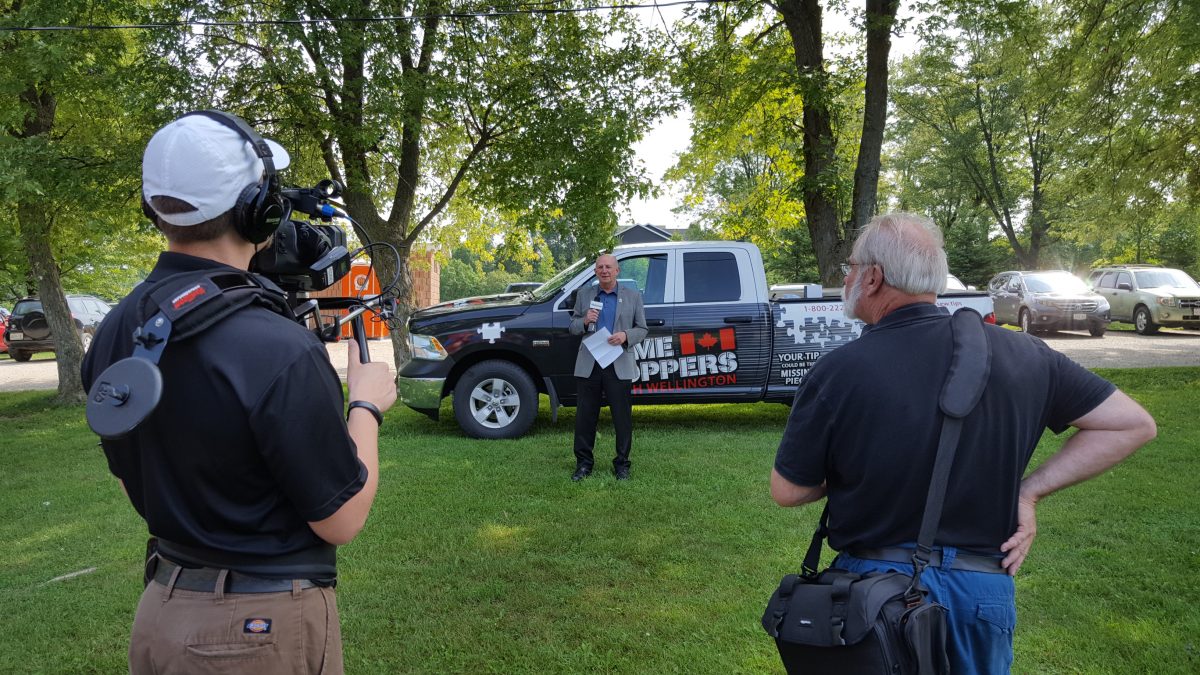 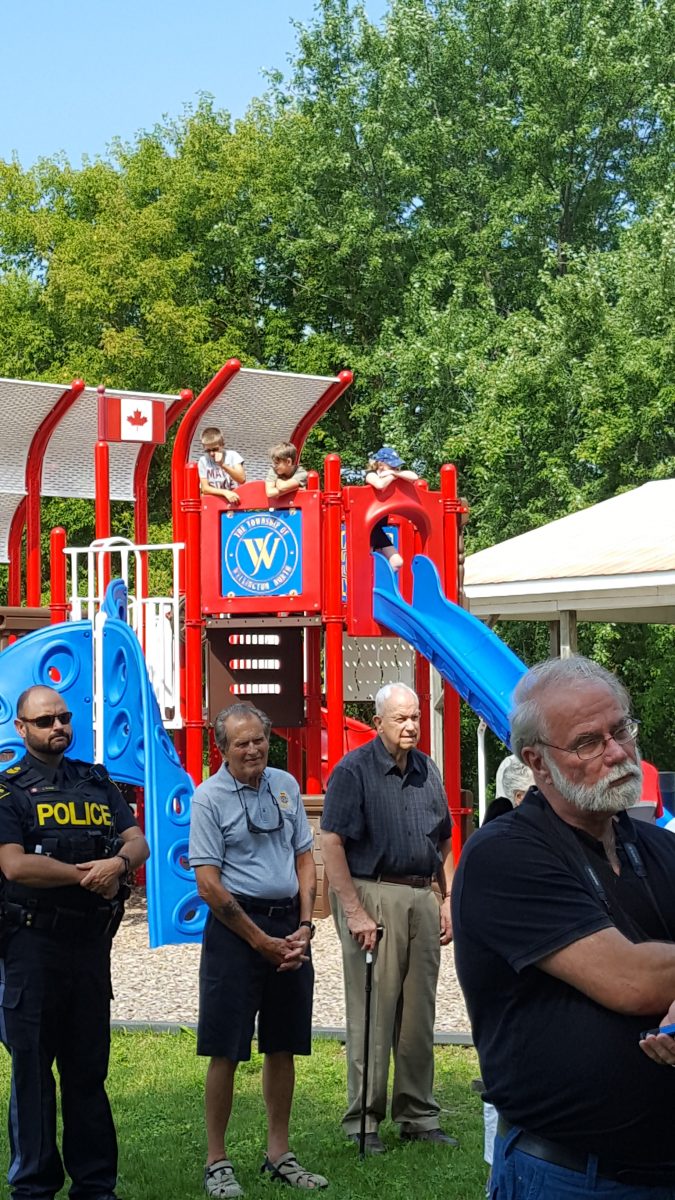 Even the youngest attendees respectfully listened to the various addresses. 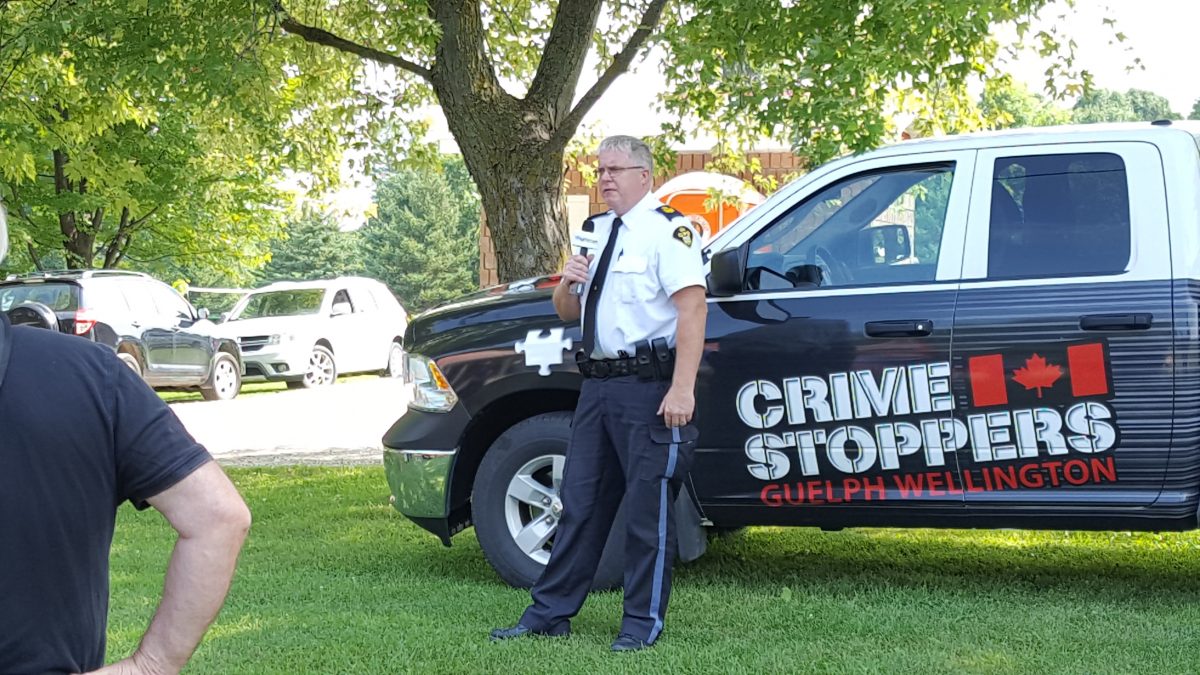 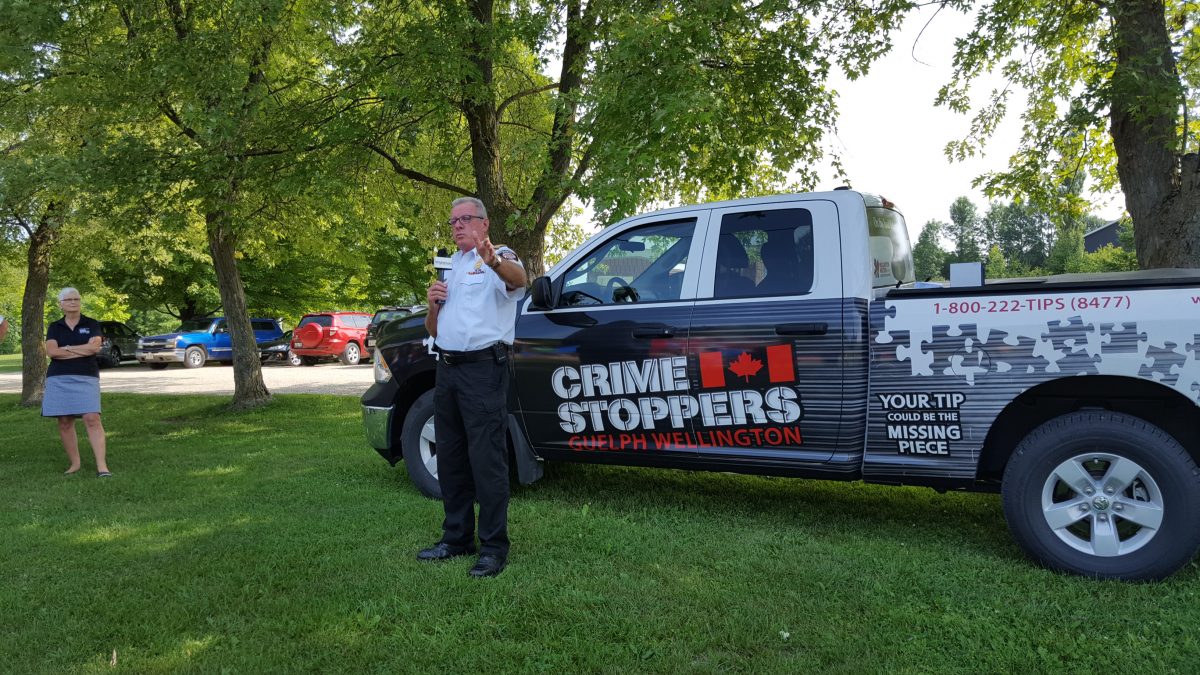 Wellington North Fire Service Chief Dave Guilbault brings greetings from the local fire service. WNFS was the first in the County of Wellington to install CSGW decals on its trucks. Fire Chief Guilbault also served for a time on the Board of Directors. 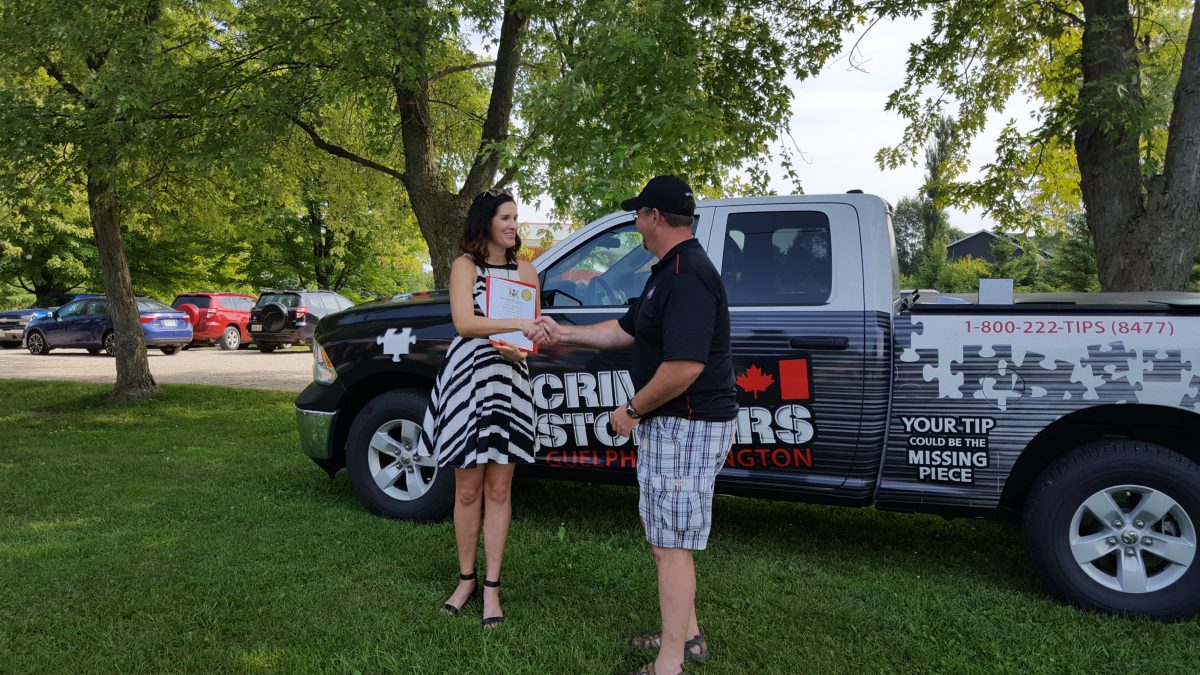 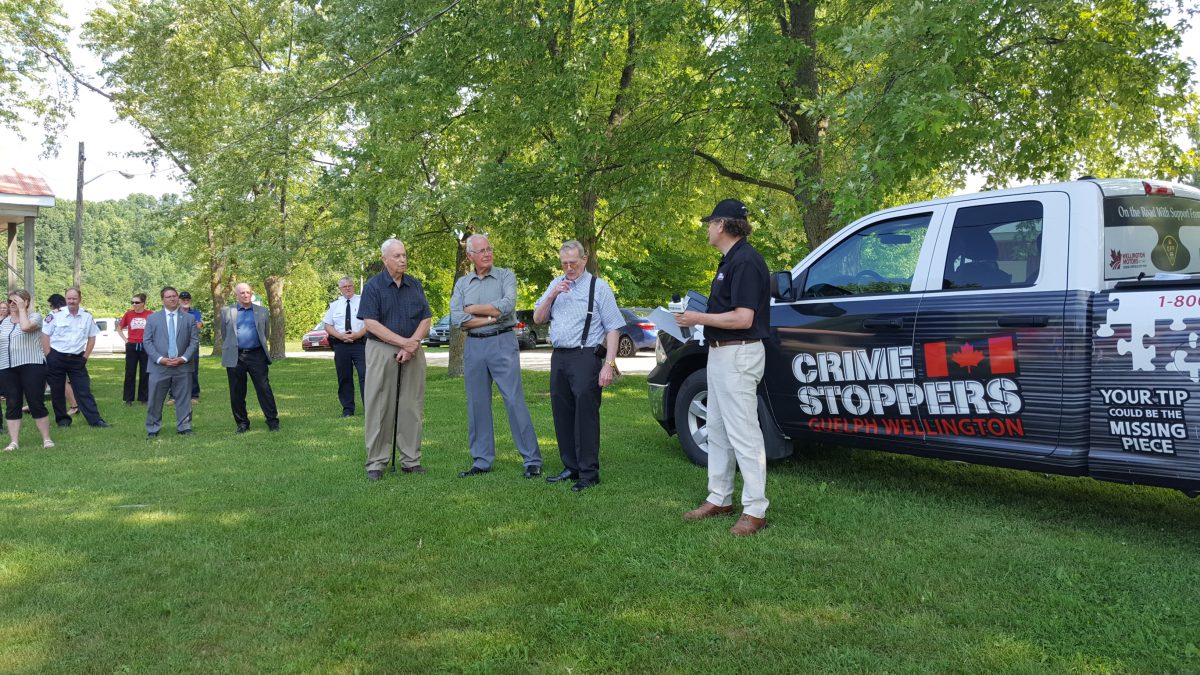 Some of the individuals responsible for creating CSGW were recognized for their contributions. Here, from left, Paul Truex, Dick Stewart and Mike Blythe were presented with tokens of appreciation by CSGW Board member John Svensson, and named as Honorary Lifetime Members. A number of members unable to attend the event, will also receive this recognition.

A special message from Crime Stoppers founder Greg McAleese was read by Program Coordinator Sarah Bowers-Peter. She also indicated that the 20,000th tip had been received by the program within a week of the 30th anniversary. 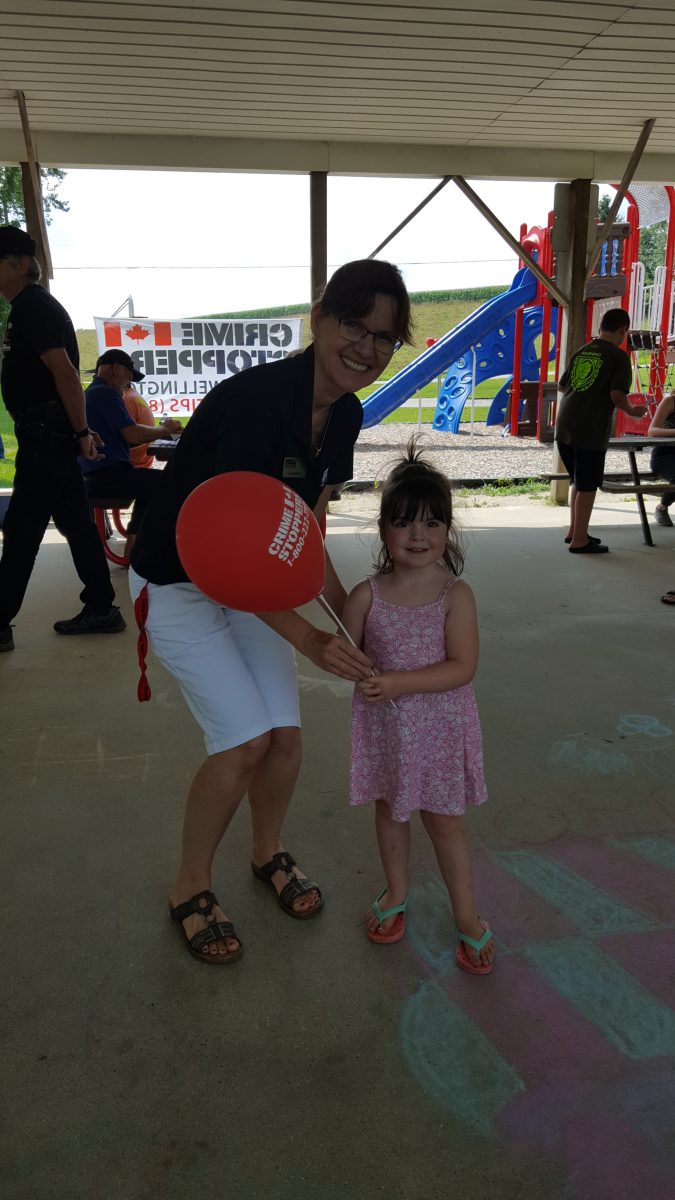 Next, it was time for the food and celebration, complete with balloons for the younger guests. Office Coordinator Leesa Keleher hands out the CSGW balloons. 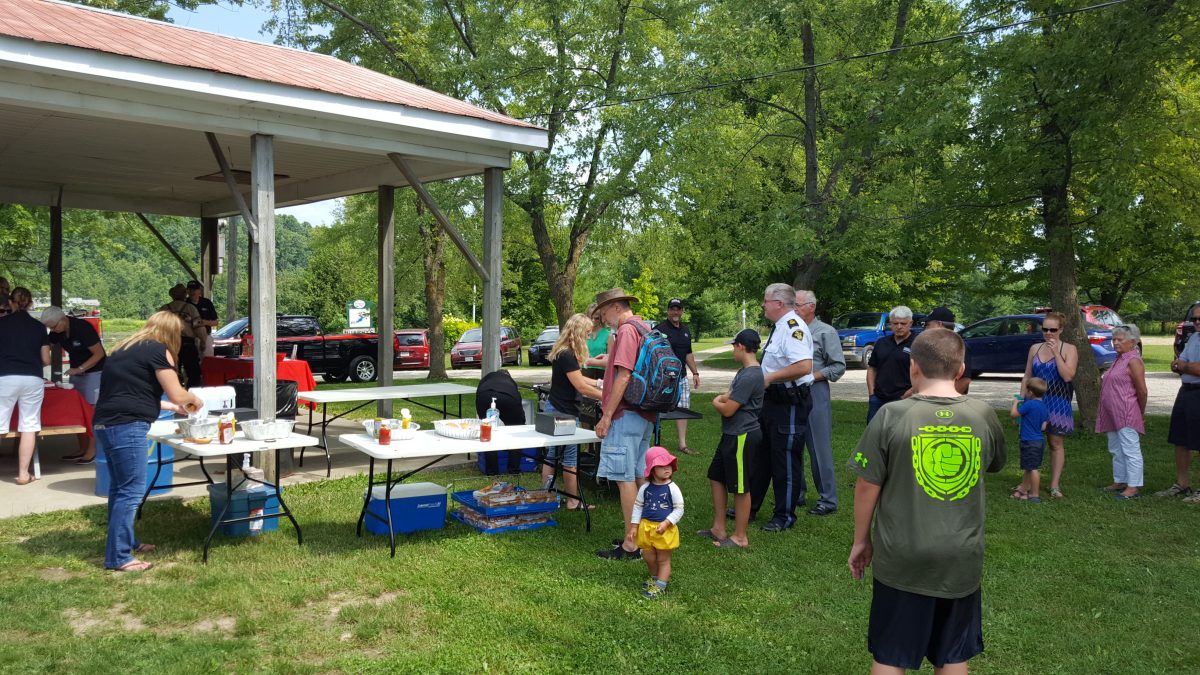 Hamburgers and hot dogs were offered, in addition to a special cake. 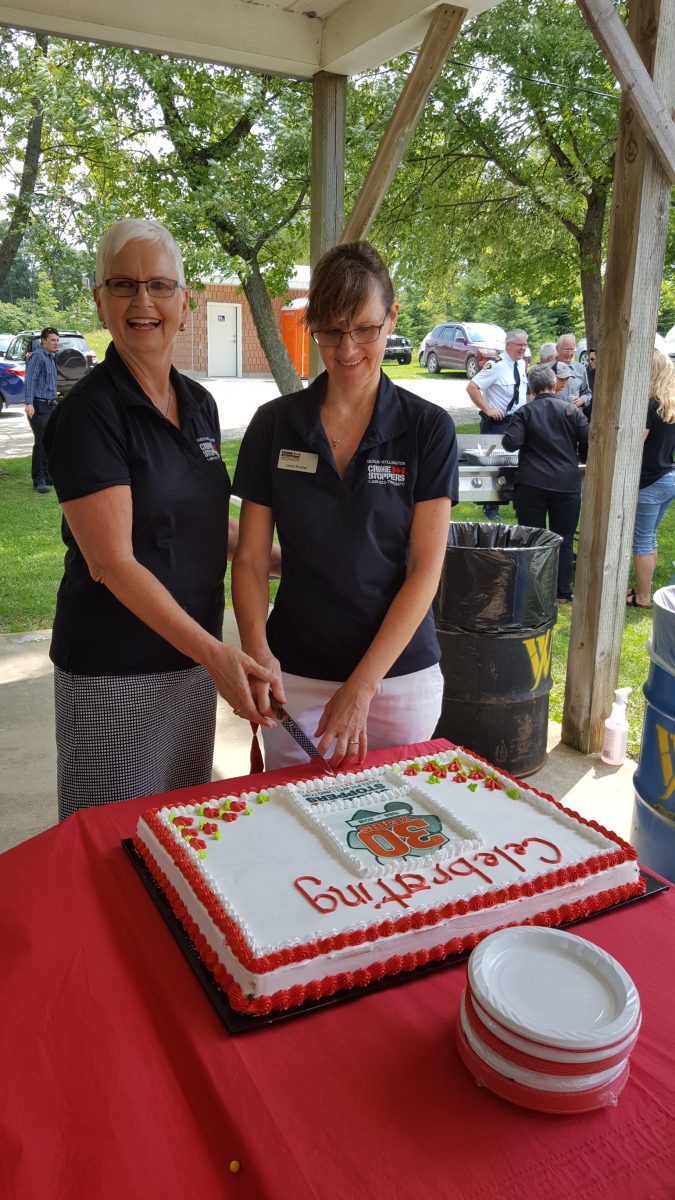 Here Marlene Coughlin and Leesa Keleher slice the celebratory cake. It was a hit with guests of all ages. 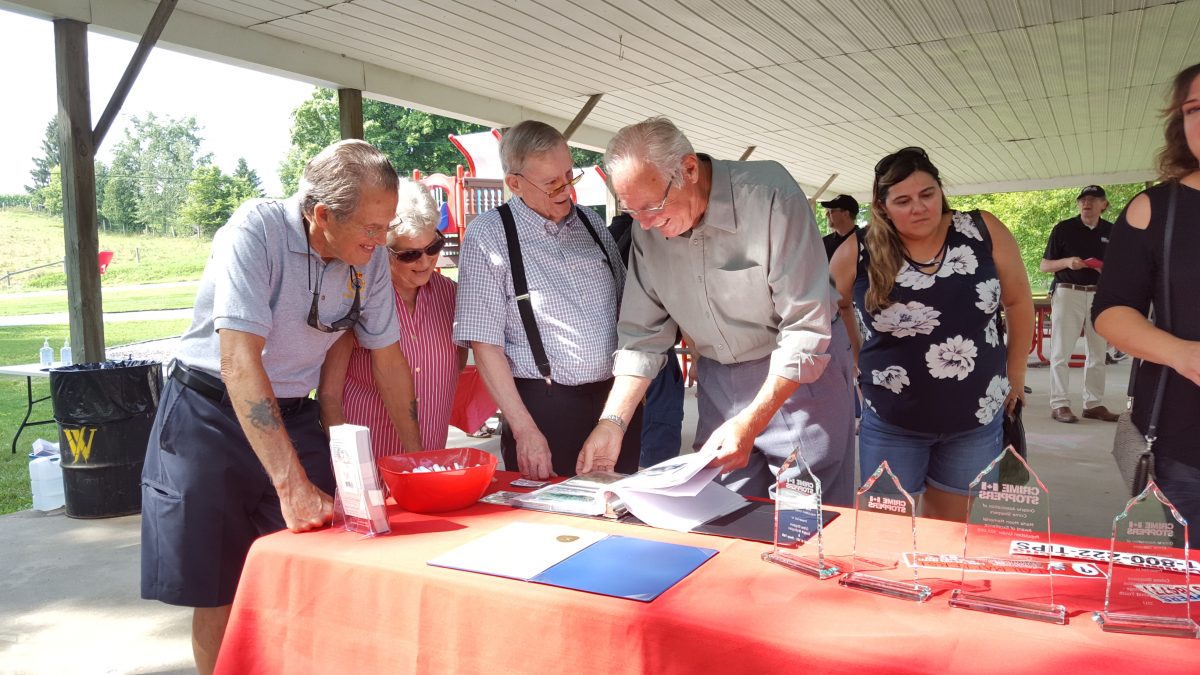 The archives were a source of interest for past Board members, in addition to the five OACS awards that were on display. 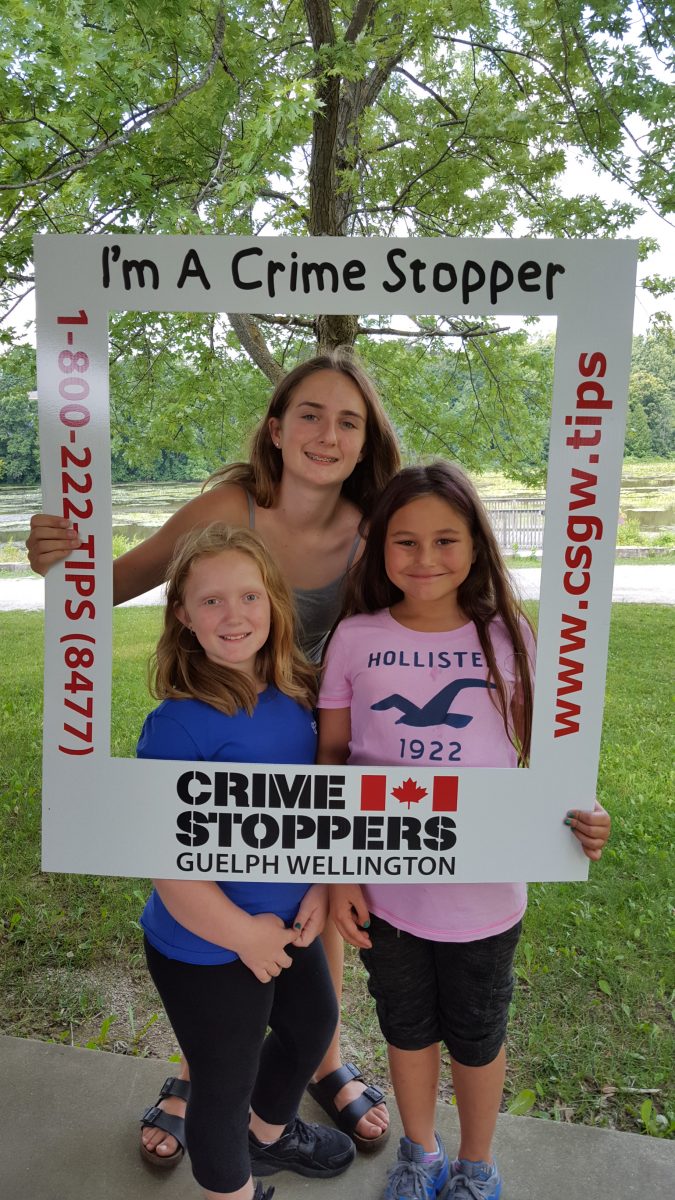 The photo area of the event was well enjoyed! Here Jaylin, Hayley and Taylor demonstrate their CSGW pride! 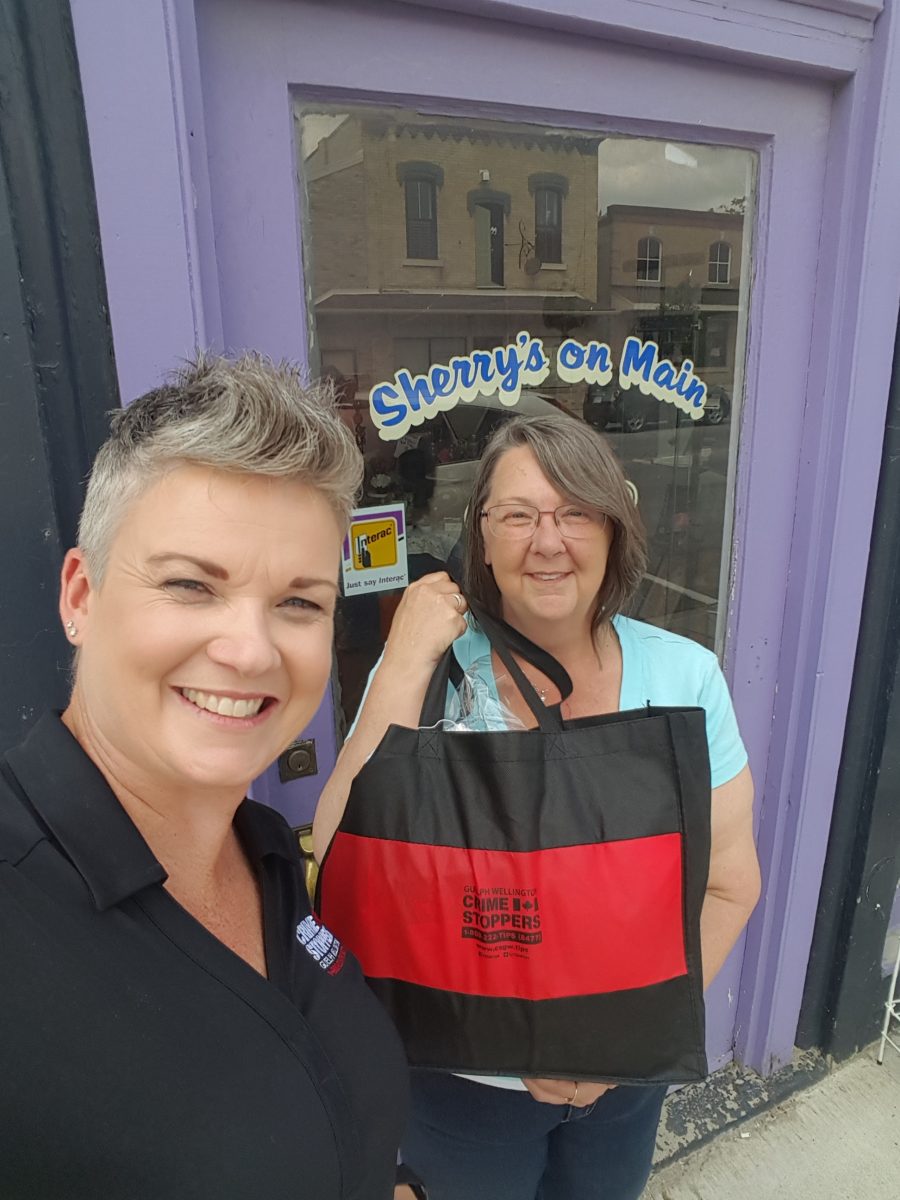 The event was also were the winners of the Where In Wellington Is Crime Stoppers contest were announced. Here Sherry Campbell of Mount Forest accepts her prize from Sarah Bowers-Peter. Adam Olivero and Cari Greulich Whitelaw were also drawn as winners.

The Board of Directors would like to thank all who attended the event and help them Celebrate 30 years of Crime Stoppers Guelph Wellington. 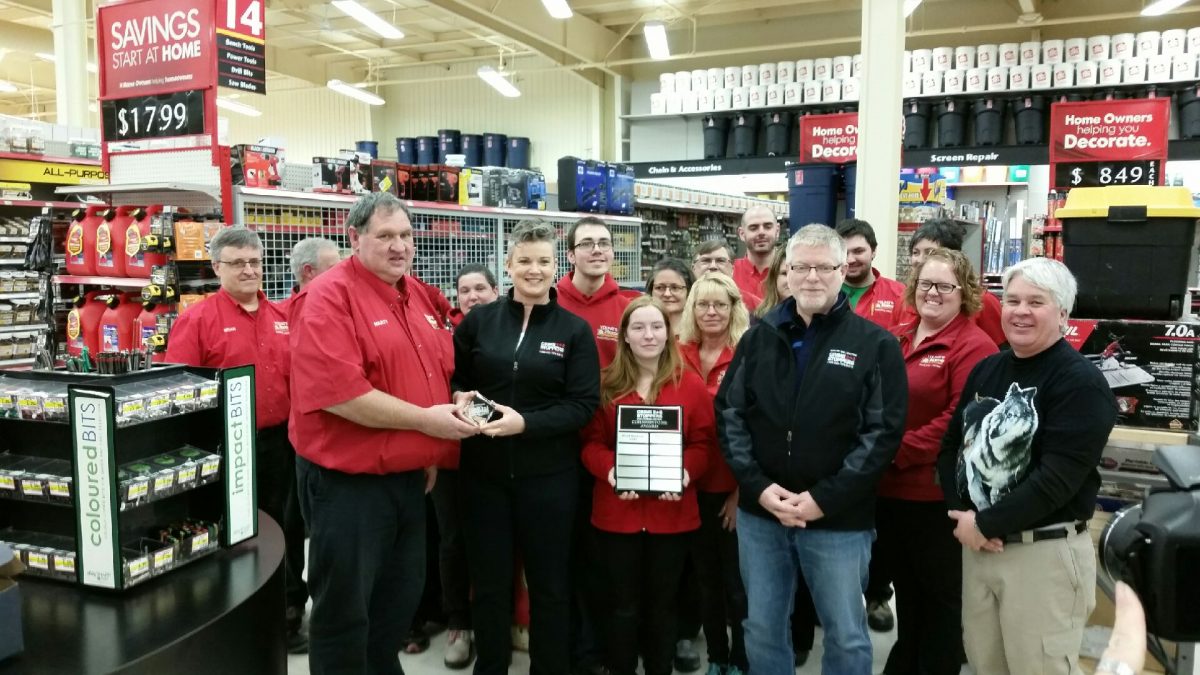 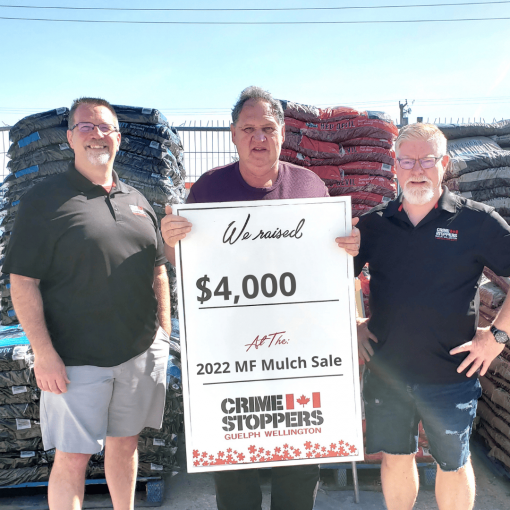 After a two year absence, the Mount Forest Mulch Sale was well received by area residents. As a result of the […] 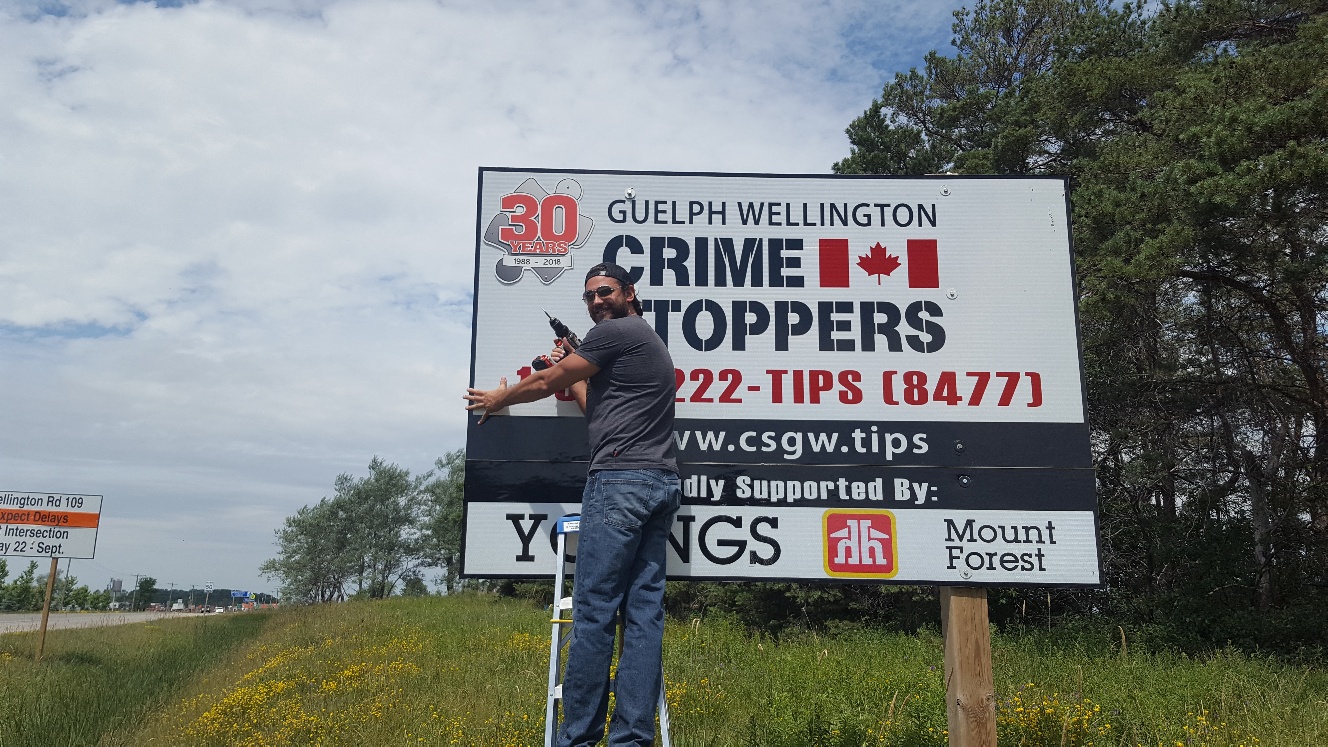 Crime Stoppers Guelph Wellington’s (CSGW) road signs are getting a celebratory touch to mark a special anniversary. To mark 30 Years of […]